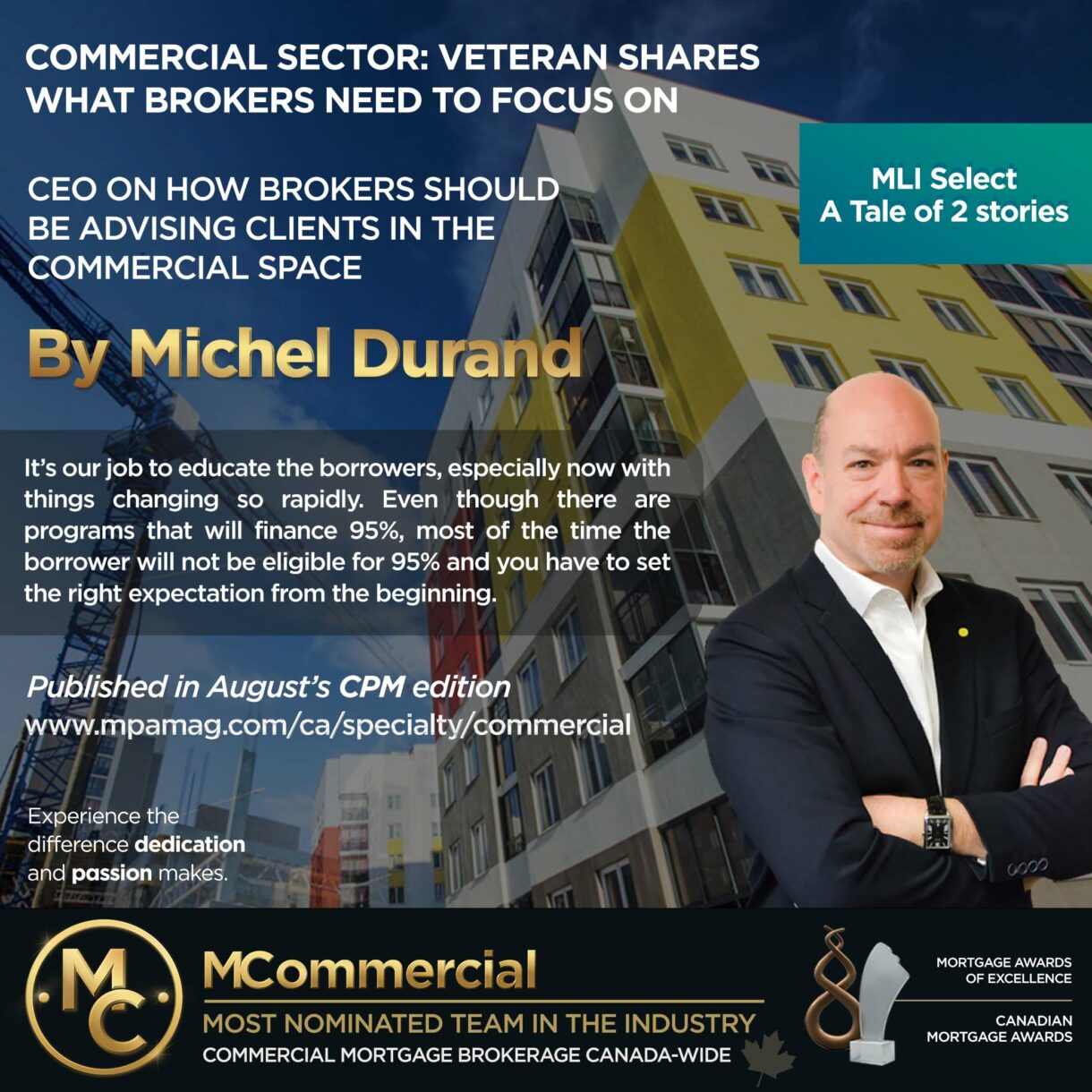 Commercial sector: Veteran shares what brokers need to focus on 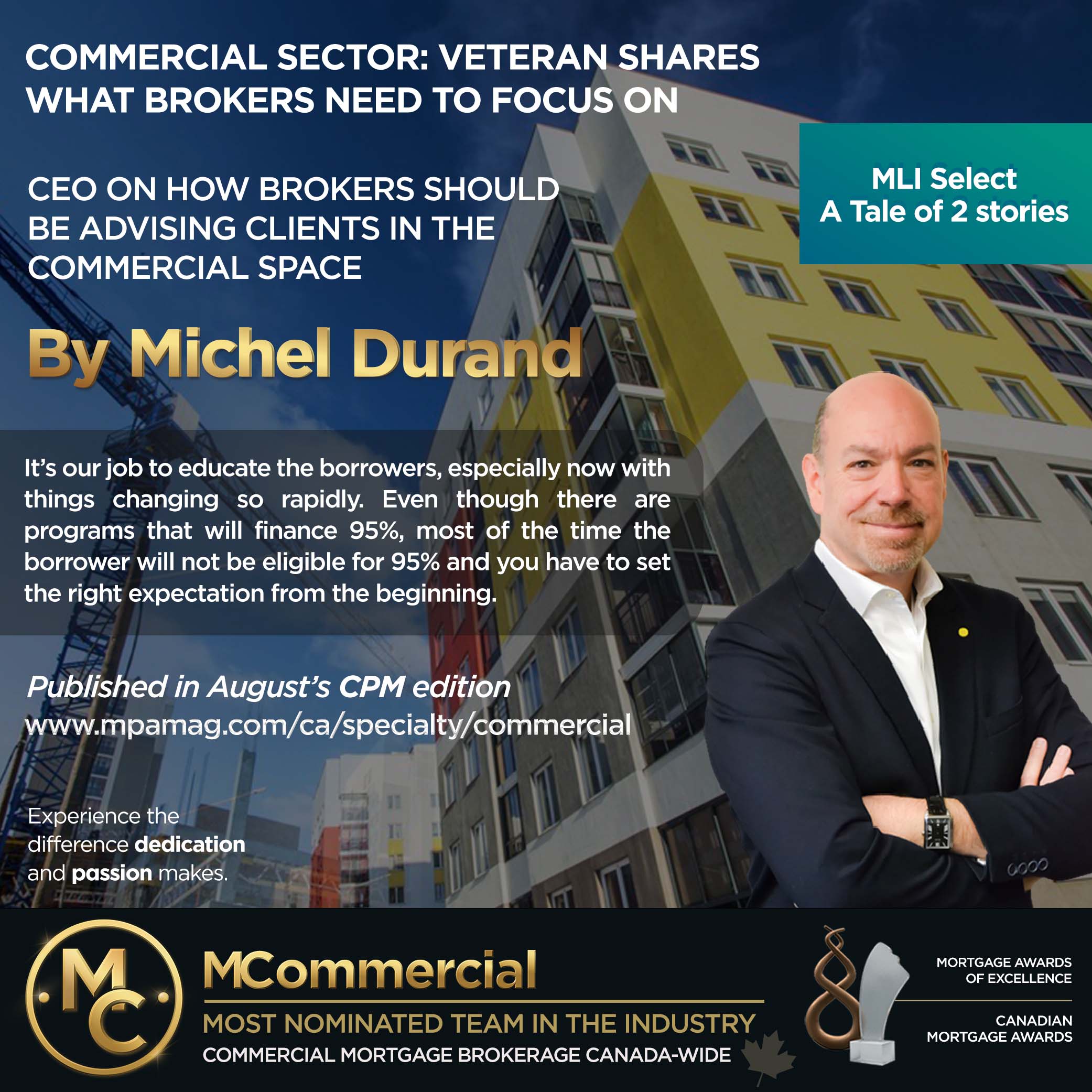 Throughout the trials and tribulations of 2022 in the mortgage space, the commercial realm has also seen a changing landscape with interest rates and borrowing costs on the rise.

That’s not to say that opportunity doesn’t remain. One of the most welcome developments this year to date, according to a prominent figure in that sector, has been the introduction of a mortgage loan insurance (MLI) program by Canada Mortgage and Housing Corporation (CMHC) that’s helped builders withstand the impact of rising interest rates and continue with their projects.

“Thank goodness CMHC brought in their MLI program at the beginning of the year. Without that program, there are way more projects that would be shelved entirely,” he told Canadian Mortgage Professional. “The CMHC MLI program allowed many builders to continue the process and build out even though the rates increased.”

For those who qualify, the program features debt service coverage of 1:1.1 and an amortization of up to 50 years – representing at least $1 million more in finance, Durand said, on a $20 million project compared to the standard program.

It also offers maximum financing of 95% for eligible borrowers, although Durand emphasized that it’s important for brokers to realize that’s the upper limit and not necessarily a figure that all applicants will be entitled to.

Top of mind for mortgage professionals should be understanding how the programs work and making sure clients also have realistic expectations, according to Durand.

“It’s our job to educate the borrowers and especially now when things are changing so much, even though there are programs that will finance 95%, most of the time [a borrower] is not a 95%, and you have to set that expectation from the beginning,” he said.

“I’ve got a lot of brokers coming to me saying they want 95% of their costs, but it doesn’t work like that. We have to figure out once they finish the build, what’s the anticipated revenues? Does the debt service coverage of those revenues less the expenses support 95% of the cost? Sometimes, it’ll only support 90% or 85% of the cost.”

That 95% LTV figure is a “best-case scenario” – and it’s also essential to keep in mind that holding off on a project in the expectation that interest rates will fall in the next six to 12 months is the wrong approach, Durand added.

In fact, if a builder can’t figure out how to make a project work now, a very valid option is to sell the property, he said. “A lot of builders… have some land and they bought three, four years ago. And now that they want to build, their ability to support the build is not there.

“Well, don’t build – sell the land. You’ll almost make as much money,” he said. “Instead of making $5 million after the build, sell it for $3.5 million and pocket the money.”

That rising-rates environment means that things are returning to normal after the unprecedented borrowing conditions of the past two years, he said, with the opportunity to build a project for next to nothing and reclaim all the invested equity no longer an option.

Still, despite increasingly choppy economic waters, Durand remained typically optimistic, emphasizing that the mortgage industry has been through difficult times at many points in the past.

“It’s important to remember it’s a difficult and volatile time right now because a lot of changes are happening all at the same time, which causes a lot of uncertainty. We’ve been through this many times before,” he said.