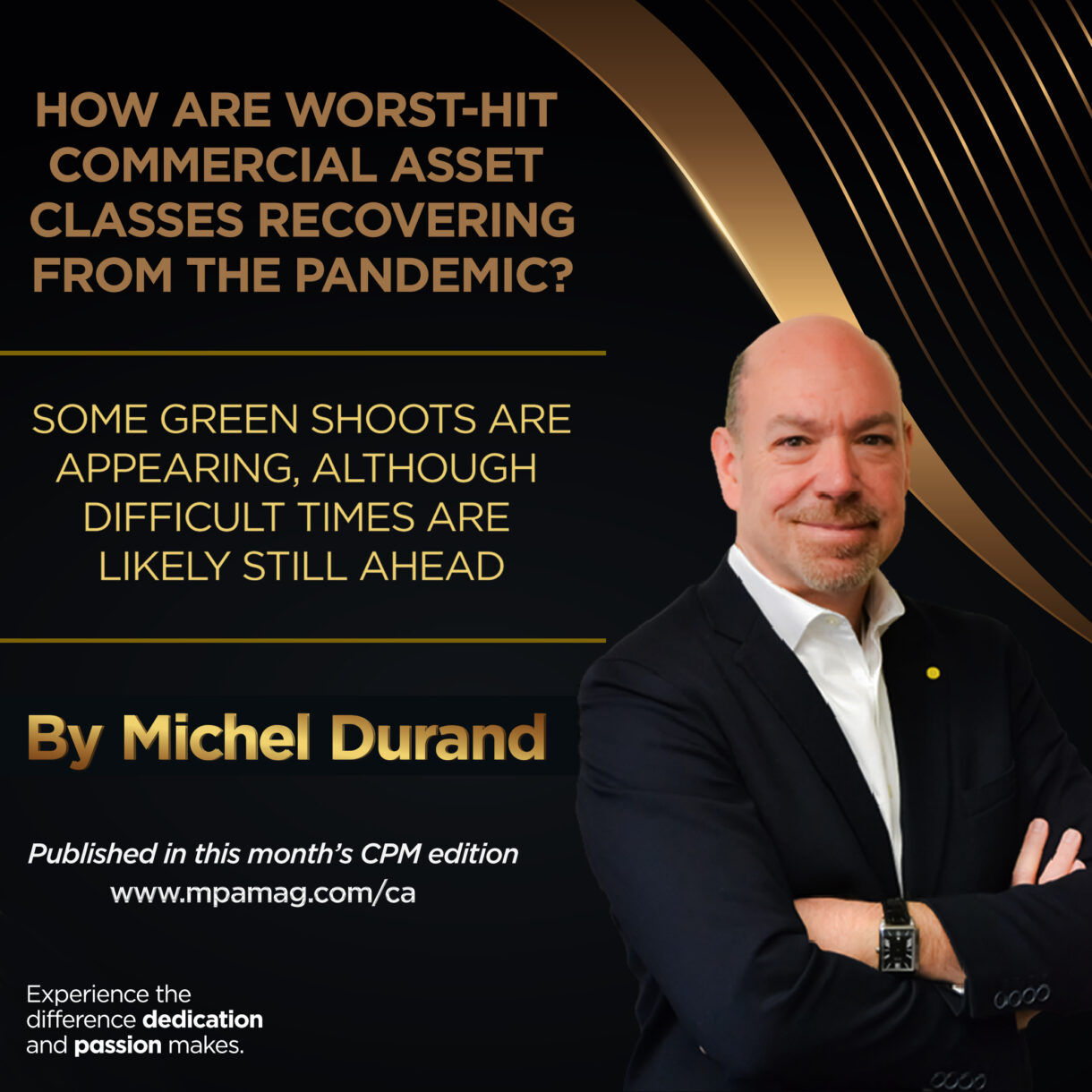 How are worst-hit commercial asset classes recovering from the pandemic?

Some green shoots are appearing, although difficult times are likely still ahead. 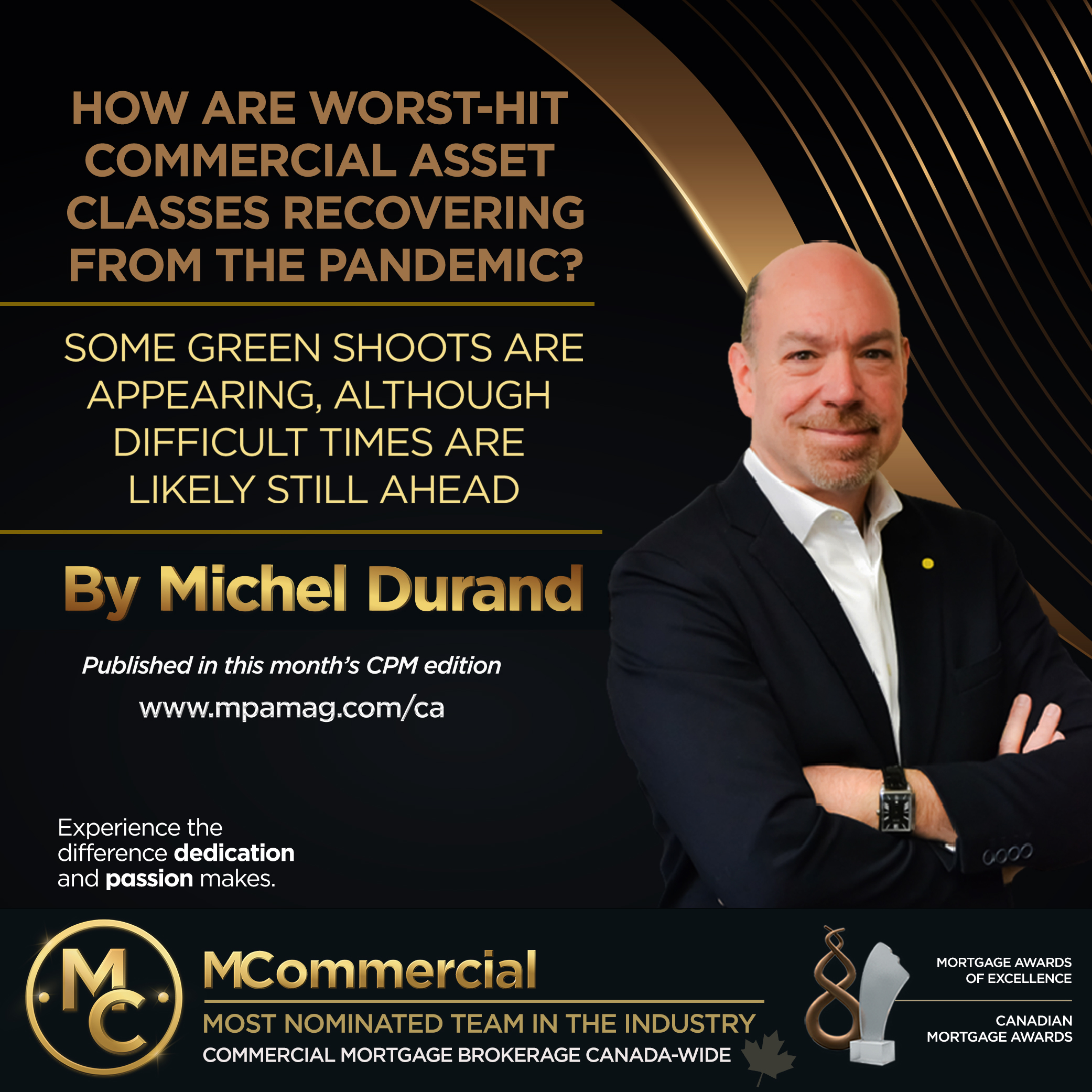 They were two of the commercial asset classes that were most badly pummelled during the COVID-19  pandemis – but with public health measures slowly easing across Canada, much attention will now turn to whether the country’s hospitality and retail sectors are in for a revival.

Business closures, stay-at-home orders, travel restrictions and migration away from the city all had a disastrous impact on the hotel industry, with Canada’s hotel occupancy rate plummeting to below 20% by the first week of April 2020 as the pandemic took hold.

Unsurprisingly, that had a huge negative effect on construction prospects in the sector – although recent data published by STR, a hospitality analytics firm, gives some cause for optimism as a possible post-pandemic landscape comes into view.

The company said that occupancy in Canadian hotels had risen above 55% in the first two weeks of April, bringing it back to about 90% of its March and April figures in the year prior to the pandemic.

Meanwhile, hotel projects scheduled to start construction in the next 12 months are set to rise by 23% compared with the previous year (91 across the country), with rooms year over year registering a 50% increase to 12,473 rooms, according to the Lodging Econometrics Construction Pipeline Trend Report.

Michel Durand, CEO and founder of commercial mortgage giant MCommercial, told Canadian Mortgage Professional that there had been some signs of a slow but steady recovery for the hotel sector across the country.

“The hotel market is only recovering now. It’s been a difficult struggle for all the operators and the lenders – the lenders are really sticking to renewing the current loans and not really supporting brand new builds,” he said.

“You don’t dump new rooms in a market that’s already suffering. But it’s picking up – the occupancy rates are rising quickly as people are getting back to some sense of normalcy. For the hotel industry, that uptick in the comfort level is there.”

That’s a positive sign for the future prospects of hotel construction, said Durand. He told CMP he had been having “good, progressive” discussions with lenders who were encouraged by that gradual rise in hotel occupancy.

A majority of projects in the pipeline in Canada are in Ontario, with that province accounting for 59% of impending hotel builds (151 projects and 20,533 rooms). British Columbia lags far behind in second place with 36 projects and 5,668, with 23 projects planned for Alberta.

Unsurprisingly, Toronto is the city with the most projects in the pipeline: 25% of scheduled projects are planned for Canada’s most populous city, followed by Montreal, Vancouver, Niagara Falls and Ottawa.

Where retail and office space are concerned, average weekday visitor volumes across both North America and Canada reached their highest level since before the pandemic in the first week of April, according to Avison Young.

Still, weekday visitor volume across North America is still 62.3% lower than early March 2020, with Avison Young’s president of professional services for the Americas Sheila Botting noting that a fundamental shift towards a hybrid model, blending work-from-home and office arrangements, had likely taken place.

“We need offices without a doubt – that does not go away,” he said. “But the scale and purpose of these offices does change.

“It’s going to scale up or scale down for any organization based on business purpose, culture, how people work and, ultimately, the role of the office.”

Durand said the prospects of the office and retail sectors had taken a substantial hit because of rising interest rates so far this year.

“We feel the lenders have come to grips with retail and office space. The good managers and portfolio owners of those two asset classes – the lenders came around,” he said. “They said, ‘We’re seeing that good borrowers are managing and navigating this difficult time very well.’

“They were almost back to where they were with their comfort level [with] borrowers that had a proven track record, and we were able to show for the good borrowers that they managed the crisis quite well. But as they’re getting out of the pandemic, the rising interest rates give them another kick in the shins for borrowers in those asset classes.”