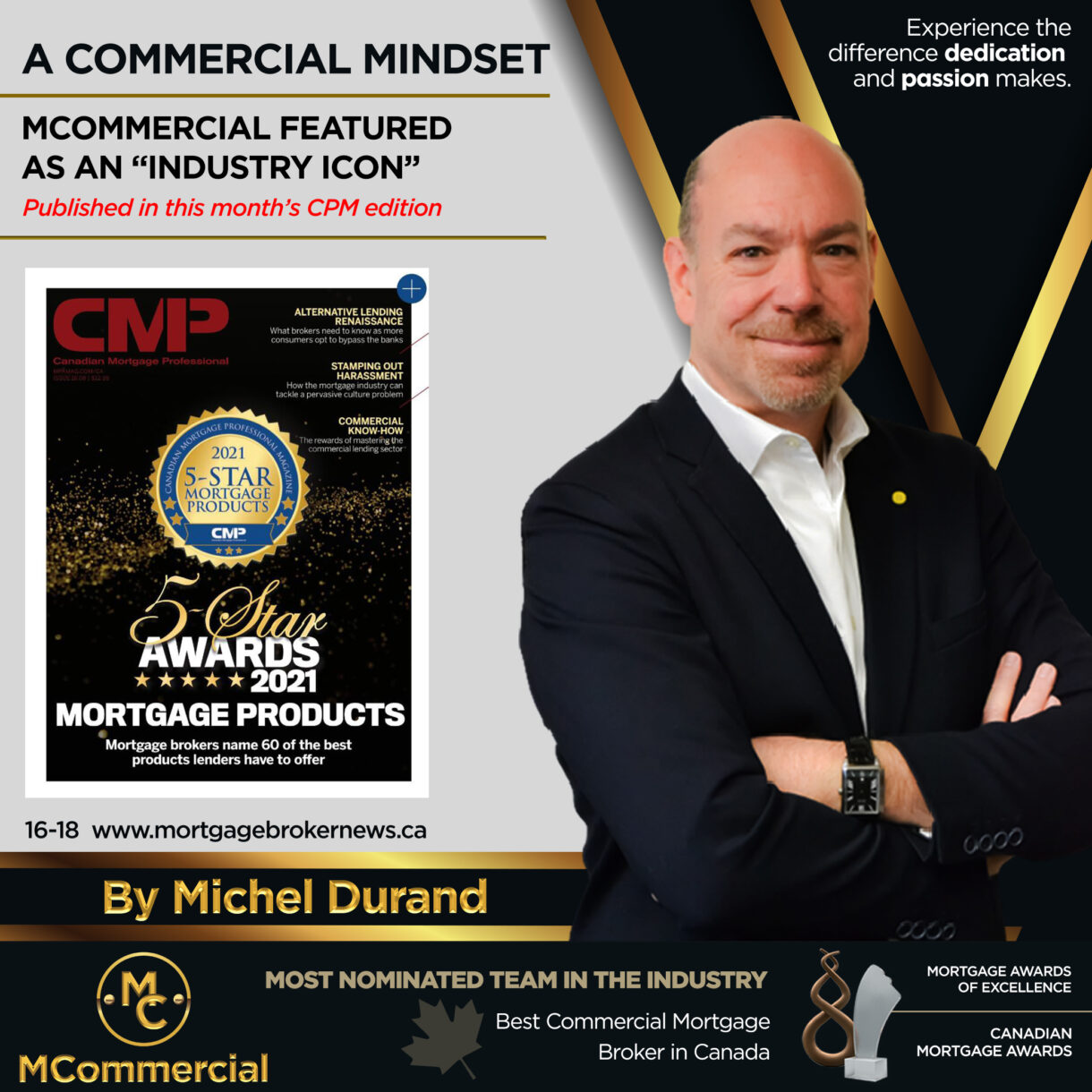 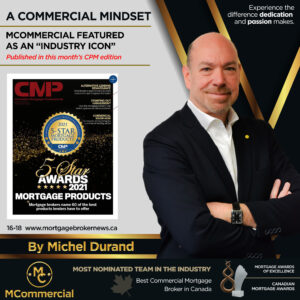 Michel Durand founder and CEO of MCommercial reflects on the career that’s helped him become one of the commercial mortgage sector’s leading lights.

For Michel Durand, commercial mortgage brokering isn’t just something you can dip your toes into. It’s a full-time commitment – a pursuit that requires the utmost dedication, devotion and professionalism in order to find success.  Durand’s belief has been honed through his own experience; the industry veteran has been specializing in commercial mortgages ever since he entered the broker channel following a stint in banking as a commercial account manager.

“From the very beginning, my first job was on the commercial side“ Durand says. “I felt really comfortable in that space and grew in it.  I think it was definitively an advantage to stay there – it allowed me to master the asset classes in that area quicker. I don’t have 17 products that I’m trying to sell; it’s just one. So it allowed me to really focus, and I’ve found that people who focus, master their craft and work hard become successful.“

It’s certainly proven a winning formula for Durand. After becoming a commercial broker in 2000, he went on to form the company now known as MCommercial, helming an organization with a specialty in negotiating and securing commercial mortgages specific to various asset classes.

His prior decade of experience in banking has served as an invaluable asset to Durand in his mortgage career, allowing him to see how Lenders operate in the commercial sphere and helping open his eyes to the vitality of brokers.

“I understood what could be done as a broker to continue supporting borrowers needs“ he says. “I supervised my toolkit to help borrowers. Is. Instead of being limited to the policies and politics of one lender, I could now take a borrower’s needs and place it with whichever lender was motivated by those particular dynamics at that point in time. Lenders have different appetites for different asset classes, and their appetite changes depending on which province the transaction is in. For me, becoming a broker was just taking the next step from my banking career to perform better and offer more complete solutions to borrowers.

“I don’t have 17 products that I’m trying to sell; it’s just one. So it allowed me to really focus, and I’ve  found that people who focus, master their craft and work hard become successful”

Headquartered in Durand’s hometown of Montreal, MCommercial also boasts a significant presence in Toronto and Vancouver. Its growth has been sizable but managed; Durand quickly realized that flourishing commercial brokerage isn’t defined by the number of agents at its disposal but rather by the expertise of each mortgage professional on an individual asset class.

“I limited the brokers to those who really took their craft seriously on specific asset classes that they mastered, instead of trying to be a jack of all trades on the commercial side,“ he says. “We ended up significantly reducing the number of our agents but increasing volume and revenues. What I found to be a successful model for us was not adding a bunch of brokers or agents but rather making sure those agents know their craft well and, just as importantly, are supported by an awesome group that underwrites and supports all their administrative needs.“

Durand quickly realized that on the commercial side, where 70% of an agent’s  efforts are often spent putting a deal together, it was essential to provide top-class support, freeing up time for agents to focus on meeting clients, closing deals, and targeting their market better.

“Once you’re comfortable in your space, you quickly learn as a commercial agent that you have choices,“ he explains. “You can work on ten $1 million deals or 10 million deals.  The revenues are going to be quite similar, but the workload is different. Once we started putting all the right tools in place, not only did we need fewer agents to grow the volume but it also allowed everyone to target the market better, and we continued to grow the volume by doing fewer transactions.“

“You need to be able to identify what’s going to work and what won’t, and the only way to do that is to do it on the job“

The level of expertise and specialization in specific asset classes that’s required is part of the reason that Durand believes commercial brokering shouldn’t be combined with commitments in other sectors.  Rather, he says, brokers should treat the commercial space as something of a vocation: an area that can offer huge reward,  but one that also requires a significant degree of dedication and sacrifice – particularly in the first couple of years, when profits can be hard to come by.

For brokers hoping to get involved in the space, Durand says, there’s nothing more valuable than the influence and guidance of a mentor. He also advises not branching out into too many asset classes, as that approach can leave brokers overstretched and overwhelmed and overwhelmed.

“You need to be able to identify what’s going to work and what won’t,“ he says “and the only way to do that is to do it on the job and have a mentor who shows you what to spend your time on and what to focus on.“

Success in the commercial space also requires brokers to understand lenders appetite for specific deals and how it can change over time. Durand says his success has been developed through an innate appreciation of that phenomenon – and the reputation he and his company have carved out as professionals who will approach each deal methodically and meticulously to get the best outcome for lender, broker and borrower.

“Over the years, we’ve been fortunate enough to earn a solid reputation with all the financial partners that we use, wether their credit unions, insurance companies, conventional banks,    pension funds or other lenders,“ he says.

“When lenders see our deals on their desk, they’ll have a tendency to grab that one first because they know it’ll be well prepared.  We’ve earned a reputation where we’re considered good collaborators with them.“