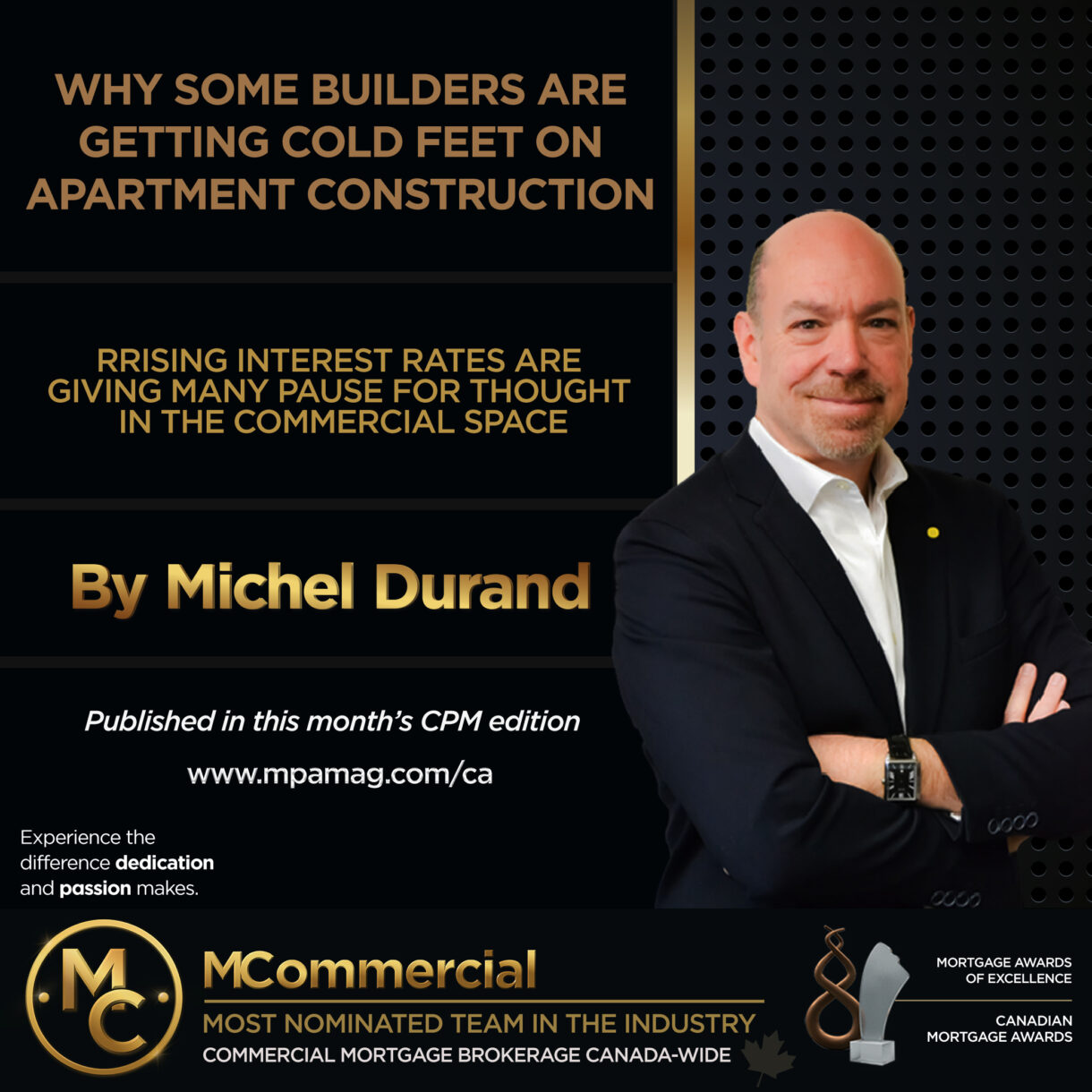 The rising-interest-rate environment that has gripped Canada in 2022 is having a significant impact on the country’s commercial financing market, with a noted shift seeing builders gravitate away from purpose-built apartment projects and towards condo construction.

That’s according to MCommercial CEO and founder Michel Durand (pictured), who told Canadian Mortgage Professional that higher rates had led many builders to have second thoughts about committing funds toward apartment construction.

Rates have been creeping up steadily throughout the year to date, with the Bank of Canada announcing an unexpected one-percentage-point hike in mid-July that brought its benchmark lending rate to 2.5%, a fourth consecutive hike after nearly two years at a rock-bottom 0.25%.

Major lenders have also been ticking their own rates upwards on the fixed side since last year after a period of slashed borrowing costs.

While during the last few years builders have mostly been able to regain the equity they’ve put into purpose-built apartments because of record-low interest rates, that’s no longer the case – meaning those projects are no longer as appealing, according to Durand.

“[Builders are] used to taking all their equity out,” he explained. “So they’ve been re-questioning whether or not to even do apartment buildings. In the last several months, we’ve seen a lot of projects get put on hold as they figure out, ‘Since I’m not going to be able to take out my equity, do I build out an apartment or do I switch into condos?’

“They’re building condos. When they sell out, they get all their equity back and they make money. So there’s a shift in the market right now: whereas more than half of the projects were apartment buildings, because of the interest rate hike, buildings are putting projects on hold and a vast majority of them are seriously considering just shifting into condos, which will not help out the market.”

That’s an unwelcome step because there’s a need for affordable rental units, Durand said, which was recognized by Canada Mortgage and Housing Corporation (CMHC) when it unveiled its MLI (multi-unit mortgage loan insurance) Select program in March.

The scheme will cover up to 95% of costs depending on the percentage of affordable units included in a build, also offering a debt coverage ratio (DCR) of at least 1.1:1 for those projects that qualify, and amortizations of up to 50 years. Those make a potentially “huge” difference on projects, Durand said, in helping builders continue with construction even amid rising rates.

Still, the fact that builders will usually have to leave a percentage of their equity in the project – at least 5%, and usually more – means that they’re now sometimes reluctant to commit to that type of construction, according to Durand.

In turn, while many of those builders are now switching to condo construction, rate hikes are also having an impact on that market because fewer would-be condo buyers are now able to qualify for a mortgage.

“The interest rate hikes did not affect the ability for builders to build out condos, but it affected their ability to sell them out,” he said. “And the sales process is taking a little bit longer now. Instead of having your purchasers on the first crack getting their mortgage approved, now you’re sometimes going to the second, third, or fourth purchaser. So that process is taking a little bit longer.”

It’s incumbent on brokers and lenders to remind borrowers in the realm of commercial construction that leaving some money in a project isn’t the end of the world, according to Durand, with a relatively small amount left in a multimillion-dollar project still representing good value for money.

“We have to take the time to show them that the numbers still work regardless of the fact that it’s not what [they’re] used to – it’s still a great investment, so go ahead and do it.”